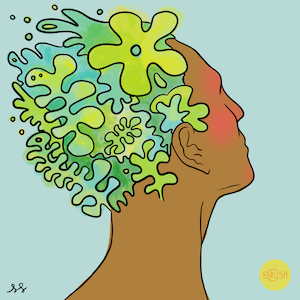 Sex Could Be A Playground But We're Treating It Like A Cubicle.

You are the responsible party for your desire.

This may be hard to hear for people who like to link their desire to a partner, but according to Perel it starts with the individual. And it requires a practice.

Sex could be a playground, but we’re treating it like a cubicle.

A sense of routine undermines any sense of surprise, suspense or longing. How can someone possibly long for something they are tired of? People who cook the same meal over and over will come to tire of it, if not loathe it. And people who have the same kind of sex repeatedly often find that they no longer want it. Their desire plummets. Perel believes that we can solve it simply by engaging our minds. During her interview on the Ten Percent Happier podcast hosted by Dan Harris (at 24:25), she talks about how our imagination is the gateway to adding artfulness—even poetry—to sex. There’s nothing basic about sex, especially when we aspire to create rather than to climax—though that’s important, too.

*The show’s first twenty minutes on growing up in the Flemish “hood,” on her mother hiding in the woods for a year to escape nazi’s, on the five languages spoken at home and sitting in her parent’s dress shop observing in detail the ways people related are not only the high point of the podcast, but also the only place where she’s gone into the significant detail on the background that shaped her.)

If you’re only going to take in only one thing on Perel and Desire then it should be the podcast podcast: Cultivating Desire” [The Knowledge Project Ep. #71] Farnham Street with Shane Parrish

Play Well With Others. Tip #1: Spot a Liar. By Dish Stanley

The Crush Letter No 62

"Divorce, Baby, Divorce" by Liza Lentini "Don't Touch My Hat.*" Midlife Men & Loneliness "This is a Tale of Modern Love ..." 5 Great Boutique Hotels Around NYC. By Jeanne Bosse 5 things that turn our crush readers on A Book That Could Unf*ck Your Relationship: I Want This To Work By Elizabeth Earnshaw. Reviewed By Angela Kempf. A Circle of Crones. By Elayne Clift A Roman Love Affair. By Lady Verity A Turntable and a Candle: F-ing Classics About Face: Skincare Essentials for Men Amplify! Sex with Emily: The 12 Episodes CRUSH Readers Should Get on Top of An Upbeat Playlist for the Divorce-curious And I Wondered ... Do We Really Need A SATC Reboot? And Just Like That... Who Are These People?? By Jeanne Bosse Bedtime Rituals for Couples. By :auren D. Weinstein Bisexually Anxious Among the Noodges. Review: shiva Baby Bloody Good Sex Book Review: A Certain Hunger by Chelsea G. Summers Book Review: Norma Kamali: I Am Invincible Book Review: Swan Dive: The Making of a Rogue Ballerina by Georgina Pazcoguins. Reviewed By Lady Varity Book Review: The Confidence Game: Why We Fall For It Every Time By Maria Konnikova' Book Review: The Lover. By Marguerite Duras. Book Review: The Story of O CRUSH Summer Reading List! From CRUSH Reader Sharon Weinberg, Owner of The Chatham Bookstore Dear Dish DEVOUR {things to do, have & know about} Dish Gets A Kink Assessment. Doing Nothing With Friends Effortless, Natural Holiday Makeup. By Lauren D. Weinstein Extended Encounters. By Lisa Ellex F*ck Songs. Three Best Jazz Albums for a Sexy Night In. By Lisa Ellex Five Best Jazz Clubs Around The Country. By Lisa Ellex Four Indie Bookstore That Stayed In My Life Long After I Left Town. By Dish Stanley French Kiss: French Girls Do It Better, Right? Girl Crush. By Lady Verity Grief. By Lauren D. Weinstein Heard It at The Grammys: Dishs Crush on Silk Sonic Hefner. By Bob Guccione, Jr Hide A Love Note In Their Pocket. Holiday Perspectives. By Dean Christopher Hook Ups Hot Thots How to Be the Most Charming Person at a Holiday Party. By Evie Arnaude I just turned 60 but I feel 22 I'm Dish, the Master of Ceremonies Kathy: This Is A Love Story About Three Friends Lamentations on the Lost Art of Kissing. By Elisabeth C. Lamotte Leave the husband, bring the cannoli. By A.K.A. Darla Let's Reconsider, with Adam Grant Love & Mike's "Bad Girl Pasta" Love/Sex/Moon Magick By Lynn Eaton Melissa Biggs Bradley's New Book Safari Style Makes Me Want To Go On A Safari MIDLIFE CRISIS: When Reality Strikes, By Dean Christopher Movie Magic. By Amy Ferris My First Solo Trip: Mexico, Part I. By Dawn Larsen Naked & Not afraid by KC Roth Nice to Meet You. How Are You Crazy? Oasis in the Desert. One woman's honest journey through vaginal rejuvenation. OMG Yes. Pillow Tawk (or NOT)? Play well with others. By Dish Stanley Playing Games: A Review of Esther Perel's New Sold Out Card Game. Podcast Review: Dying for Sex. Why You Need to Listen to Molly's Journey. PrimeCrush & Chill: The Hottest Thing to Watch Right Now Is A 1968. French Psychodrama "La Piscine" PrimeCrush Cocktail Coaster Giveaway! QUIVER. Sexual Debut Stories. Red Flags Reports from the edge. By Jane Boon Sexual Frustrations. By Elisabeth C Lamotte Shameless Quick & Easy Mac & Cheese. By Evie Arnaude Sighs & Moans. By Ralph Greco SIP. Best Lines from the Double Dates Podcast Hosted by Marlo Thomas & Phil Donahue Six Ways to Get the Friends Who Count Snapshot Rec: Get Yourself Sexify-ed on Netflix. Snapshot Rec: Read Liza Lentini on the Indigo Girls in SPIN Solo in my Sixties. By Jeanne Bosse Songs That Make You Wanna F*ck. Stanley Tucci Is Paradise Stories to Read Aloud to a Lover. By A.K.A. Darla The 3 Things You're Really Fighting About The 4 Most Common Skincare Issues for Men (But Were Afraid to Ask). By Lauren D. Weinstein The Crush Letter 44 The Crush Letter 51: DEVOUR The Crush Letter 58 The Crush Letter No 33 The Crush letter No 36 The Crush Letter No 39 The Crush Letter No 40 The Crush Letter No 41: DEVOUR The Crush Letter No 42 The Crush Letter No 43 The Crush Letter No 45 The Crush Letter No 53 The Crush Letter No 54 The Crush Letter No 55 The Crush Letter No 56 DEVOUR The Crush Letter No 57 The Crush Letter No 59 The Crush Letter No 60: DEVOUR The Crush Letter No 61 The Crush Letter No 62 The Dynamics of Friendhip By Lauren D. Weinstein The Friendship Files By AKA Darla The Hole. By Kiva Schuler The Holiday Anti-Checklist By Liza Lentini The Perfect Snowy Saturday. By Jeanne Bosse The Ritual of Comforts. By Lady Verity Thee Timeless Travel Books. By Bob Guccione Jr. To get all of us, subscribe. Treats: A Sex Toy Tester Update Under The Radar Series. By Dish Stanley Who Are CRUSH Readers Grateful For? You're My Medicine You're Wearing A Turtleneck, Again? Your Big Green Heart. By Liza Lentini Your Love Is King & Queen, GQ Zoning Out in Comfort. By Dean Christopher

Play Well With Others. Tip #1: Spot a Liar. By Dish Stanley

The Crush Letter No 62