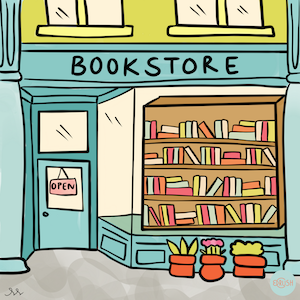 Four Indie Bookstores That Stayed In My Life Long After I Left Town. By Dish Stanley

My Mother loves books and so I love bookstores. Especially these.

My mother, a former librarian, grew up in a small upstate New York town on the Erie Canal where she escaped the unending cold winters (and no doubt, small-town life) by reading.  By the late 60’s she was living in California with a husband and three small kids.  When school got out, my Mother would pile my brother, sister, and I in a station wagon for a road trip across the country to spend summers on the East Coast while my father stayed back to work.  We did the trek back and forth multiple times, following different routes laid out by the AAA TripTiks.  For my mother “that looks like an interesting bookstore” was reason enough to pull over for an impromptu stop in a small town. I think that is how I came to think of indie bookstores as the place to get a concentrated feel for the heart and soul of a place.  Here are the ones that have stayed in my life long after I left town.

(How cool and daring is my Mother, by the way, to have taken on these long cross-country journeys with three small kids?)

Powell’s, Portland, Oregon. “Bringing readers together for 50 years.”  This is a third-generation family-owned business that expresses all of the chaotic, abundant, serious, and quirky energy of Portland. I first got lost in its shelves in the early 90’s while visiting Portland to see a guy I had a short, deeply philosophical fling with. He picked up The Precipice Garden, a book of poetry by the American conductor James DePriest for me there.  I’ve kept in touch with Powell’s (if not Eric) ever since. Powell’s hosts an impressive offering of virtual author events.  Two weeks ago I joined for one with the great musician Rickie Lee Jones reading from her memoir Last Chance Texaco: Chronicles of an American Troubadour.  Jones, a very spiritual person, ran away from home at 14, beginning a life on the road where the danger she encountered only seemed to spark her belief in the magical.  You can listen to a recording of Rikki’s Powell’s enchanting talk here.

Faulkner House Books, New Orleans. “A sanctuary for fine literature.”  It is owing to another former love that I first met the Faulkner House.  He had had his own independent publishing firm before we met, specializing in mystery, history, and erotica (or “Fresh Fiction,” as he liked to call it).  On our first trip to New Orleans together we stopped in this tiny, atmospheric bookstore housed in the 1837 townhouse where William Faulkner lived, where I met Joanne Sealy.  She is Faulkner’s magical sorceress whose powers include making the perfect book recommendation based on a brief conversation with you.  I was looking for a mystery.  Joanne asked what I’d read recently that I liked (answer: Interview with A Vampire by Anne Rice, in anticipation of the trip).  She then left through the back door and reappeared minutes later with Tana French’s In the Woods.  I have since visited and ordered from Faulkner House many times.  I recently learned that her magical powers have extended to the online, where she started a “Personalized Book Subscription.”  Joanne builds a personalized dossier of what you like - she asks you some questions to get started, and encourages you to call for further discussion (how sweet is that?) - then she sends you a customized selection each month.  I just signed up.  This means that Joanne is the finest gift that that naughty old flame gave me.

Strand Book Store, NYC.  I lived two blocks from the famous Strand Bookstore at 12th Street and Broadway for years in the late 1990s.  I loved wandering through its rows and rows of disheveled books and passionate but often detached (and sometimes also disheveled) staff. For one thing, it was a cheap thrill, and for another, you might run into somebody famous. Uma Thurman and Ethan Hawke were living together down the block, for instance, and I think I saw them browsing the erotic lit section but really who knows because I was playing it too cool to look over long enough to be sure.  Another late afternoon I thought I saw the musician Patti Smith, the “punk poet laureate,” who worked at the Strand in 1970s for a brief period but reportedly said she didn’t like it because “it was unfriendly.”  At any rate, it was the Strand that I made a trip to in 2010 after Smith’s Just Kids was published.  I picked up a signed version of her memoir about living in 1970s New York and her relationship with Robert Mapplethorpe, and that is reason enough for a lifelong love affair with the Strand.

Jackson Hole Book Trader, Jackson Hole, WY.  I wandered into Jackson Hole Book Trader on my first trip to Wyoming in 2010 and picked up Jackson Hole: On a Grand Scale by David Gonzales. Gonzales writes passionately about the history of Jackson Hole’s epic terrain (featuring the greatest vertical drop of any U.S. ski resort) and the book certainly hastened my growing love affair with the area.  Jackson Hole Book Trader has been a community gathering spot and local institution since 1998 and in 2017 it was bought by Susie Temple, who had worked at the store.  It sells new, used, and rare books, including everything from the latest bestsellers to regional favorites, as well as a growing collection of splendid vinyl records.  It captures Jackson Hole’s true feelings, and I don’t miss a trip there when I’m in town.  Especially if a storm is coming in.

To get all of us, subscribe.Four Indie Bookstore That Stayed In My Life Long After I Left Town. By Dish Stanley