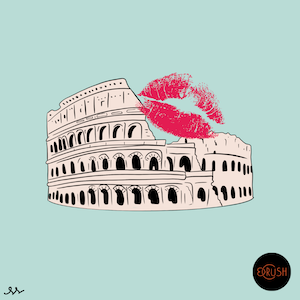 I was sipping an espresso in one of the many cafés strung like gemstones around the Piazza Navona, the ancient racetrack turned piazza where Romans love to rendezvous. A strong puff of breeze sent my paper napkin flying onto a nearby table where a cute guy was sitting less than a couple of feet away in the cozy outdoor space. He smiled and politely placed the napkin back on my table. I had been reading Cellini’s biography and trying to spend my vacation shifting gears and merging into Italy’s famous “slow life” lane.

The cute guy and I locked eyes and he asked the standard question: “Where are you from? America?”

“I’m from London originally,” I said, “but I’ve lived in New York for a long time.” Within the course of a café conversation, Marco, yes, his name is Marco, told me he was divorced (no kids and his ex was remarried -- so far so good!), and he was the principal at an architecture firm. He was classic-Italian-playboy cute. Pale rock-star face, dreamy bronze-colored eyes flecked with gold and black shoulder-length hair with just the perfect fluffy waves. He was wearing all black, a black lambskin leather jacket, and boots that looked like they cost more than a month’s rent. In this slow city, it turns out that things can happen surprisingly fast. After talking for a couple of hours, when Marco looked into my eyes, we were suddenly the only two people in the world. He whispered, “I read my horoscope this morning and it said I would fall in love today.” Reader, know that I rolled my eyes and laughed. But we had fallen in love at first sight.

Fast forward and we’re living together. And I’ve learned a thing or two about Italian men. When it comes to romance, there’s no timetable, no “you’ve got to wait for three dates” rule. If an Italian guy likes you, you know. Incidentally, that old bestseller called The Rules, the one that was a Bible for the single woman -- well, they never heard of that book here. If an Italian guy is into you, no pun intended, then he wants to see you tomorrow and tomorrow night (and meet his friends too) and then put that cycle on repeat. It’s true that Italian men adore women, and the reason is that they adore their mother and grandmother. Call them mama’s boys if you want -- but it’s a good thing because since childhood they’ve practiced loving women. Hence, you don’t have to deal with the baggage of problematic mother issues. From the get-go, they’re ready to treasure you.

Yes, Marco, like most Italian men, is a bit of a peacock, but that’s fine with me because he looks so damn good. He smells good too, kind of like a field of manly wildflowers, if there were such a thing. After moving to Rome, I learned the secret of why Romans look fly. Rome has the best tailors in the world and Roman men visit their tailors even more often than they visit their mothers. Which is a lot! Because guys live at home with their parents well into their 20s or 30s, or however long it takes to get married -- this is their normal -- they have tons of disposable income to spend on clothes or sexy Ducati motorcycles. They also like to spend their money on you. Italian guys are generous when it comes to women. It makes them happy to buy you things and that term “going Dutch,” well, like the aforementioned book, they never heard of it. Unlike the behavior of Americans that I’ve witnessed, they don’t have the wallet-stuck-in-the-pocket syndrome when the check arrives. Instead, when an Italian guy says he’s on the way to the restroom, that’s usually code for he’s on his way to pay the check before it arrives at the table.

In case you’re wondering, Marco didn’t rush into having sex. First, there was a romance with a capital R. Dinners, flowers, gift of a Pomellato bracelet, long walks along the Tiber River. Back in the U.S., friends tell me the current dating trend is known as Netflix & Chill because that’s exactly what it is. This wouldn’t gain traction in Italy. Italian men like to take their time courting a woman, and THEN they like to take their time making love.

Marco, like other Italian guys, keeps the florist shops busy. Italian men don’t wait for Valentines’ Day, a birthday, or Christmas to give flowers. Marco, by the way, just bought a glorious bouquet from the florist -- but not for me this time. We’re on our way to his parent's house, so I can meet them for the first time. Things are moving fast in the slow lane.

To get all of us, subscribe.A Roman Love Affair. By Lady Verity