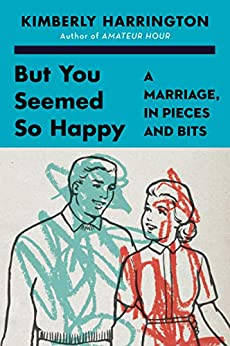 Book Review: But You Seemed So Happy: A Marriage, In Pieces And Bits. By Kimberly Harrington. Reviewed By Bob Guccione Jr.

My men friends hate me for this, but I’ve had two of the most peaceful, agreeable, and amicable divorces in the history of, well, mankind. When my first marriage ended, my wife and I agreed on a $10,000 settlement, because, as she succinctly, and fairly, stated, “I came into this marriage with 10,000 dollars and I want to leave it with 10,000 dollars.” When we finally got around to legally executing a divorce, after --- this is true --- for two years thinking our mutual friend, a lawyer, was the other’s attorney for this, the lawyer she found asked me for $100,000. I called my (still) wife and said, well, I suppose this is the way it goes, when things get down to the brass tacks, and she cut me off and said: “He asked for what? Give me ten minutes,” hung up, called back and said, “I fired him and got a new lawyer who will settle this for $10,000.” My second wife and I agreed to the terms of our divorce in ninety seconds. And that included Hello, how are you, how’s your mum? I’m proud of that. Of course, looking back, it has occurred to me that being married to me could have been so incalculably miserable that they would have agreed to a packet of crisps to be rid of me.

But You Seemed So Happy by Kimberly Harrington is a fun book of essays detailing the dissolution of a marriage, the (apparently not hard) decision to divorce --- although, if ever there was a justifiable use of the otherwise execrable phrase “conscious uncoupling,” this would seem to be it --- and then their continuing to live together, “for the kids.” (Don’t tell me therapy doesn’t have a future! It’s a completely sustainable industry! We dutifully and invariably sow the seeds for the next generation of clients.)

Harrington writes that there were “no affairs” and “no nervous breakdowns.” What an anti-climax! Where’s the juice, Woman! Instead, there was just a steady deterioration of passion for each other, and interest in evolving together. She simply discovers --- and, one wants to say, this should not be considered one of the great scientific revelations of all time --- that, two decades later, she is “not the same person she was at 27.”

What she has written is a memoir of a car crash at such very slow speeds that there’s barely any damage and both drivers sort of wanly smile at each other and ask if the other is okay. “We all hear the dramatic stories of divorce, but we don’t hear much about boring divorces. Or perfectly okay divorces,” Harrington writes by way of explanation, or maybe apology. The pandemic is invoked, because, oh God, it has to be, because it’s not enough for modern writers to perpetually navel gaze, they have to become entranced by the lint they find there. The pandemic is apparently the tint all images of current life must be viewed in, which is just ridiculous, and narcissistic. If being together under the same roof more than usual deflated your marriage, your marriage sucked anyway. And people have to get over the fact that our modern, mostly empty lives of self-absorption were inconvenienced for two years by our having to try to not die.

This is, tellingly, a book Harper Perennial didn’t feel merited the investment of publishing in hardback, or charging nearly thirty dollars for. No, this is a trade paperback at a reasonable $16.99 --- what’s that instead of, two Starbuck coffees and a crap muffin? But then this is really more a self-help book, a guide for those looking at their marriage in the mirror and being honest that it has leaked all its liquid.

But You Seemed So Happy is not literature, engaging though it is and, for a certain audience, doubtless speaking to their hearts. This is Divorce For Dummies, which I’m pretty sure already exists, by the way, just saying, if you need it.