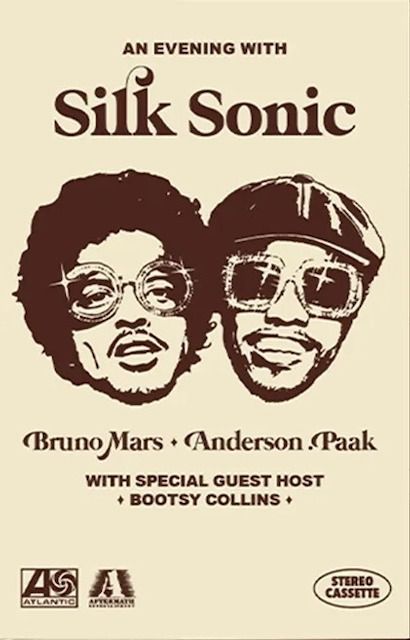 Heard It at The Grammys: Dish’s Crush on Silk Sonic.

CRUSH Readers who follow the Song of the Week religiously know how hard I fell for Silk Sonic over the past eight months. Their music was like the hard all-enveloping squeeze I didn't have but really craved during the pandemic. It was some kind of gift from heaven that I happened to come across their first song Skate minutes after it dropped this past summer in July. From that point on I was a purring cat.

Skate, the first song they released from what would become their debut album, An Evening With Silk Sonic, got featured as a CRUSH Song of the Week a day after its release.  All three of the songs they released on video--Skate, Leave the Door Open and Smokin' Out the Window--were featured as CRUSH Songs of the Week days after they dropped. How was it for you? For me it felt like that running joke:

"Having an orgasm is great and all that, but have you heard Silk Sonic's latest single?"

They've packaged up all their formidable musical talent and charisma and turned into a sound that is sex. I mean, why haven't I written up one of their songs as part of the PrimeCrush Songs That Make You Wanna F*ck series? Because that would be redundant. Their music doesn't make me wanna bang; listening to it, I feel as if I am. They are turbo-charged retro cool--their smooth sound, their humorous, sly and knowing lyrics, their over-the-top blown-up seventies look. They are heaven if heaven were groovy cool, and you were riding around in a red 1973 Chevy Camaro Z28 (which we know it's not and we won't be).

By now you've probably heard that Leave the Door Open won both song and record of the year.

If you missed their Grammys opener here it is. High energy, groovy, exciting to watch; their sound blew the doors open wide to start the show.

If bein' fine was a crime, Girl, they'd lock you lil fine ass up in a tower. Skate

From Jon Pareles, New York Times:  "Skate," the new single from Silk Sonic - the collaboration of Bruno Mars and Anderson Paak - is "a project in reverse engineering, finding and recreating the sounds and structures of the era when 1970s soul melted into disco.  'Skate' – invoking bygone roller discos – has the scrubbing rhythmic guitars, the glockenspiel, the Latin percussion, the back-talking string section and the rising bridge of late 1970s hits."

And the lyrics themselves are a 70s disco party, especially rolling out of Paak and Mars: "In a room full of dimes / You would be a hundred dollars / If bein' fine was a crime / Girl, they'd lock your lil' fine ass up in a tower."  Skate! Listen here.

Not to be dramatic but I wanna die. Smokin' Out the Window

The silky R&B duo Bruno Mars and Anderson .Paak dropped another smooth video last week.  Smokin' Out the Window is the third video Silk Sonic released this year, after Leave the Door Open (March) and Skate (July) (I want to roll, I want to ride.  Skate to me, baby.)  All three videos are sublime masterpieces of a modernized motown sound and style.   (All three are on their debut album.)  Watch Smokin' on youtube here.

I won't bite, unless you like. Leave the Door Open

The latest release by Silk Sonic (Bruno Mars, Anderson Paak) Leave the Door Open was the skip in my week.  It seems like the right place to leave you for the week end.  "Ooh, youre so sweet (so sweet), so tight (so tight), I won't bite, unless you like." Watch here

The Crush Letter
The Crush Letter is a weekly newsletter from the Dish curating intelligence & stories on all things love & connection - friendship, romance, self-love, sex. If you’d like to take a look at some of our best stories go to Read Us.

Yes, I’d like to be a Founding Subscriber
To get all of us, subscribe.Heard It at The Grammys: Dishs Crush on Silk Sonic