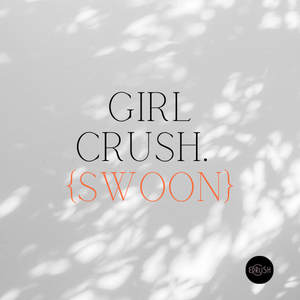 “When it happens, it’s all-consuming and you think nothing compares to the beauty and perfection of this goddess who walks the earth, the one you’re crushing on.”

Girl crush. Those two monosyllabic words don’t do it justice. Out of nowhere, no matter what age or one’s sexual proclivities, it can strike unexpectedly like a bolt of lightning out of a clear blue sky. When it happens, it’s all-consuming and you think nothing compares to the beauty and perfection of this goddess who walks the earth, the one you’re crushing on. You’d like to be her. You follow her. Study her. Copy her. If only you were as perfect as she is. And since you know (rationally) that you can’t be another person, the next best thing is to maybe adopt the same chintz tote bag or white Chelsea boots or piercings or maybe wear your hair in similar pre-Raphaelite waves or maybe emulate her “far-away” look, the one that singers and poets always fall for. But wait. There’s another option that’s much more common. You befriend her and hope that some of that magic dust will drift onto you.

This is a tale where I’m going to break writer rules by telling you straight away that it has a happy ending. Lady Verity and her girl crush are still -- over a couple of decades now -- best friends forever! These days we talk less about men since we’ve settled in with our life partners, and more about dermatologist procedures, which YouTube workouts will give us the best butt and abs, and everything else too that we wouldn’t dream of telling another person on this planet. We’ll take each other’s secrets to the tomb.

But I’ve saved something for last. I’ll tell you a hard truth I learned from being a goddess’s friend and sidekick on countless adventures. Beauty is undiluted power. If you don’t believe me, then it’s because you haven’t witnessed it firsthand. Beauty rules. It doesn’t matter how witty you are or how good at calculus (not me, by the way) or if you’re rocking a $5,000 Chanel bag (also not me) when you’re standing next to someone who looks like Kate Moss and Brigitte Bardot rolled into one. I think of Joan Rivers’ joke that a man never reached into a woman’s dress looking for her library card. Word. I felt largely invisible, though superbly valued by my friend of course, while men offered her one enticement after another -- and here’s the shocker, not even to necessarily have sex with her, but to bask in her radiant presence.

One small example is a modeling contract even though she had never modeled before. She was offered the opportunity to be the face of Clairol when we took a trip to Mexico City. She turned it down saying she couldn’t imagine her face being plastered on billboards all over Mexico. That’s how it used to be back then….one golden opportunity after another like a golden basket of eggs waiting. And to continue the metaphor, perhaps inelegantly, the eggs didn’t last forever. In Rome as she left Babington’s Tea Room, a real Italian count rolled down his tinted limo window and introduced himself. She got in the car and they lived together for some months until she dropped him because he was a drug addict. Men offered her money, gifts, trips, and marriage proposals. In fact, when one has the power of physical beauty, one doesn’t need to say much or do much of anything except allow adoration, riches, and opportunities to flow their way. I read an interview with Catherine Deneuve once, who said she’d go to parties and not say one word. Life is unfair. I learned this at my BFF’s side.

I thank the stars that I met my BFF long ago when we were students at Saint Martins in London. I remember how she looked that day and what she wore -- a flowy silk blouse and crushed black velvet skirt and black nail polish -- like she had just stepped out of a gothic fairy tale illustration. I forgot to mention that once we became friends, she told me she had a girl crush on me too. It was reciprocal. We’re still best friends and will live, as such, happily ever after. The end.

To get all of us, subscribe.Girl Crush. By Lady Verity