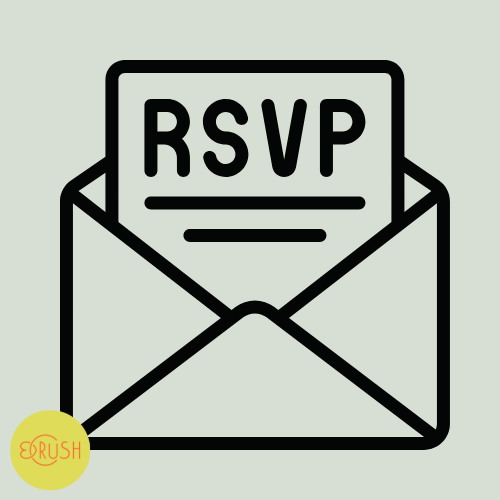 Holiday Invites: Say “Yes” to “No”. By Lauren D. Weinstein

You know that “thing” you didn’t want to go to? One PrimeCrush writer gives you permission to stay happily at home.

While sifting through copious amounts of mail—credit card statements, political ads and Bed, Bath & Beyond coupons—my eyes fell upon an impressive, somewhat weighty, iridescent pearl-colored envelope. As I plucked it out of the pile, I caressed its fabric-like texture. Instantly, it reminded me of an elegant shantung suit that I once wore in the 1980s. My name and address were artfully printed in the finest Darleston font calligraphy. I thought to myself, “Uh, oh! Here comes ANOTHER wedding invitation.”

Later, when I checked my emails, I was alerted to an Evite from a former colleague inviting me to a fundraiser, supporting refugees, to be held at a trendy art gallery in Chelsea.

I employed the use of a letter opener (it was more like a machete) to open the thick, padded envelope and clicked the Evite to read the following words: “You are cordially invited to attend…” These declarations used to bring a wide grin to my lips. My presence is wanted, I gleefully thought. I genuinely looked forward to, (Okay, obligated at times) to accepting ALL invitations that came my way. It didn’t matter if it was to attend family holiday gatherings, fundraisers, graduations, weddings, gender reveals, jewelry, Tupperware or adult-toy parties. No matter what, if it was an opportunity to meet, greet, connect or wear my attention-grabbing, Tom Ford, off the shoulder, black cocktail dress, I was there. As a single person and a freelancer, I thought accepting invitations might be a perfect opportunity to network, expand both my business and social circle and as a bonus, possibly make a love connection.

Now, not so much. I think twice before I quickly RSVP. I used to be on automatic pilot and accepted invitations without much thought or consideration of how it might affect me.

After navigating life during the isolation of the pandemic and previous years of accepting countless invites, I began to see the beauty of sitting still and concentrating on what I truly valued and enjoyed. I became aware of why I said yes to some invites and no to others. I began to check in with myself to see if it was worth the investment of my time, emotional, spiritual energy and on occasion, my financial resources.

I will let you in on a secret; saying NO doesn’t come naturally to me. I’m a somewhat reformed people pleaser. Initially, I felt guilty declining invitations. It didn’t feel comfortable, and my intention was not wanting to hurt, disappoint or be on the receiving end of judgment and disapproval. Then, I had an epiphany: It was perfectly acceptable to opt out. It was a disservice to both me and the hosts to attend an event that I had no interest in. Why bother if I was sitting on the fence of ambivalence?

My priorities shifted as I grew and changed. I was more selective and protective of my time. I no longer saw the urgent need to attend all invitations to please others, force awkward networking situations or having to engage in banal conversations, divisive politics or talk about the continuing saga of the Kardashians and Kanye (Ye). I had other things that I’d much rather do or not do.

Once I dipped my toe into unchartered territory and began saying “no” to my family, friends and associates’ invitations, I admit that I was anxious. I rehearsed saying “no” out loud, repeating and explaining my reason and apologizing profusely. I panicked and wondered if I would be invited again if I kept declining. Would they think less of me? Would they feel that I was rejecting them and piss them off? I had to accept that all might happen. I had to step back and breathe. It wasn’t my job to explain myself, worry about their reactions or to convince anyone that my choices were valid and mine alone.

I cautiously began to decline simple invites with people I knew would love me if I attended or not. My sister and brother-in-law invited me to join them at a local restaurant for breakfast at 7:30 a.m. on a Saturday. Hell no! To my surprise and relief, they understood that I work very long hours on a television series and getting up early on a day off was not going to happen. Once I did it, I gave myself a celebratory high five and booked a much-needed manicure and pedicure. Then another opportunity presented itself for me to say “no”.  I was invited to a second cousin once removed son’s bar mitzvah in LA. All the distant relatives would be attending that I had no contact with for over 25 years. It felt disingenuous of me to accept. I had no desire to get on an airplane, rent a car and book a hotel just to represent a side of the family. It was another “no”. Declining began to get easier and the experience of taking care of myself became liberating and empowering. Once I claimed my power and controlled how I chose to spend my time, I no longer was a victim, martyr or a resentful sourpuss.

Saying “no” doesn’t mean that I’m not interested in accepting future invitations or participating in life. Sometimes you just must tune into your own needs first. It’s not selfish, it’s self-care. I’m much more willing to be present and give to others when I make authentic decisions. The bonus is that I’m no longer burnt out and a happier, nicer person to be around. I choose wisely, not recklessly giving my precious time and energy to people, places and things that I consider toxic or don’t represent my values or interests.

The next time you see or hear these words, “You are cordially invited…” no need to fear. A simple “no” stated respectfully, graciously and without delay, is all that is necessary. The choice to say “yes” to “no” is unabashedly yours.

To get all of us, subscribe.Holiday Invites