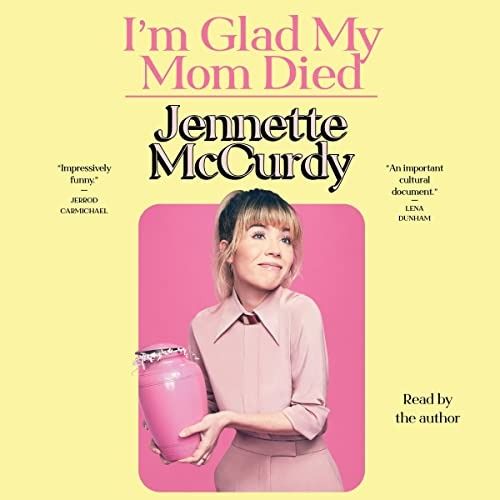 Unless you’ve been living under a rock for the last few months, you know all about this book already. The title alone sets us up for a brave, unnerving ride through the trials of child star Jennette McCurdy and the mother who pushed her into acting at a young age, subjecting her to years of extreme emotional, physical and psychological abuse.

If you think you’ve heard it all before—you haven’t. The fact that the title is so arresting at first, and got so much attention, says much more about our society than it does about McCurdy and her story. The taboo of speaking out about matriarchal abuse was still very much alive and well upon the book’s August 2022 release. Even from the first few pages we understand fully why this book is titled the way it is. We also grow to understand the sad reality of McCurdy defending her mother’s motives and actions, no matter how horrific and damaging.

Jennette McCurdy, best known for her role as Sam on the Nickelodeon show iCarly, started acting at a very young age as a means of bringing money into a troubled and chaotic-at-best household. Her mother really wanted her daughter to do this. With a father that was noticeably physically and emotionally absent (he worked multiple jobs to support the family), Jennette grew up very close with her mother and brothers in a home-schooled, economically-challenged Mormon household in Garden Grove, California. For most of McCurdy’s young life, her mother has survived breast cancer, but by the time McCurdy was 21, her mother’s cancer had returned and she was dying. In her mother’s last days, McCurdy is by her mother’s bedside trying to speak to her mother with kind, moving words that will motivate her out of her coma. When it’s McCurdy’s turn, she reveals to her mother, who’d had her on a calorie restriction, that she’s finally achieved her goal weight of 89 pounds.

And that’s how the book starts.

McCurdy’s story isn’t about abuse, it’s the story of a daughter grappling with what to do with a mother’s love tainted by abuse. Now 30 years old, she admits she’s still trying to figure this out. Her public-eye persona and life on TV might not be relatable to most of us, but her frankness in not knowing how to feel and her attempt to navigate this complex relationship definitely is.

But the abuse truly is the backdrop of this story.

One of the big “spoilers” (that’s very much discussed openly when discussing this book) is that McCurdy eventually discovers that the man she was raised to believe was her father actually isn’t, and after her mother has passed away she begins the journey of meeting him. By the end of the book you can’t help but root for her--she deserves so much better in every way.

McCurdy doesn’t ask for our pity, nor our sympathy. She tells her story with frankness and a double-dose of comedic wit, which is what makes it bearable for her reader, as well as a powerful showcase for McCurdy’s remarkable bravery and survival.

For all the writers of the world—or all the sufferers, for that matter—worried about telling their truth for fear it will demolish an existing relationship, you must read this book. If you’re questioning why you defend the actions of your abusive parent, read this book. If you’re a compassionate human who wants to hear another human’s story of survival, you should also (and most definitely) read this book. But be warned: McCurdy doesn’t hold back. Also be warned: You might come away from this book finally feeling empowered to write about the good, the bad and the ugly in your own past.

To get all of us, subscribe.Im glad my mom died