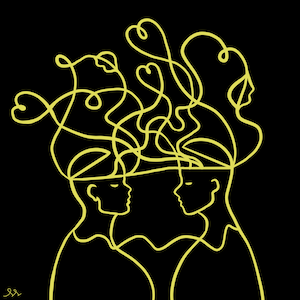 One writer recalls the unforgettable markers of a very special relationship with a very special teacher, throughout the decades. The title, translated from Esperanto: “I Love My Friends”.

My entire long life I have been blessed with remarkable teachers, a number of whom became close and valued friends.

One of those mentors and heroes, whom I acquired in high school during the late 1950s, was the tall, austere, silver-haired Otho W. Allen, Ph.D., Phi Beta Kappa, etc., with whom I studied Spanish in high school one year, and who later tutored me in French language and literature my first years of university. High schoolers tried to avoid his class, since he had the reputation (can you just imagine!) of giving lots of homework and providing thorough lessons. As a language buff, I welcomed this, and did well in his class.

We remained friends long after I graduated. He had taught at Philips-Exeter and the U.S Naval Academy at Annapolis. He knew 16 languages (he modestly admitted one afternoon that he was fluent in only ten of them -- the other six were "just working languages").

After he retired, I would regularly drop by his house for language and linguistics chat. Accustomed to old-style formality, he always wore his three-piece suit, pocket handkerchief and watch fob.

On just one afternoon he taught me Esperanto. This neutral international language, expressly designed to be easily learned (with only 16 rules and zero exceptions!) was the creation of the brilliant Polish ophthalmologist and polyglot, Dr. Ludwig Zamenhof (1959-1917). It is one of the great intellectual achievements of human history -- but has never flourished in the stubbornly monolingual U.S. (Mr. Allen -- actually Dr. Allen, as he declined to call himself -- wore the tiny green star in his lapel, indicating that he was a fluent Esperantist, committed to international brotherhood.)

One afternoon in 1964, as we sat in his parlor over Mrs. Allen's oatmeal cookies and cups of robust Arabica, he spoke of his childhood in the days of horse-and-buggy transport on the unpaved roads of late 19th Century rural Illinois. He recalled how his neighbors mocked the first clunky automobiles.

But he himself was no luddite. In 1922, as a graduate student en route to France, ears stuffed with cotton, he flew across the English Channel in a bumpy biplane. "I wish I could live to see men on the moon," he said. "I know I won't make it, but you probably will."

About three hours before Armstrong and Aldrin's landing in July, 1969, I called him up and said, "Well, Mr. Allen, assuming you live another three hours, you will have lived to see men on the moon!"

He invited me to his house (he lived four blocks away) to watch the event with him and his wife. I recall watching Armstrong's descent onto the lunar surface, and seeing my stoic old friend's eyes welling up with tears.

He has been gone for many years now. But he still guides my way. I revere my teachers.

Dean Christopher is a widely-traveled, Beverly Hills-based writer/editor who has been published in numerous national general interest and humor magazines (SPIN, OMNI, National Lampoon, Discover, inter alia), and has had overlapping careers in music, advertising, and occasionally writing books. He likes to cook.

Take Me Back To The Crush Letter No. 36