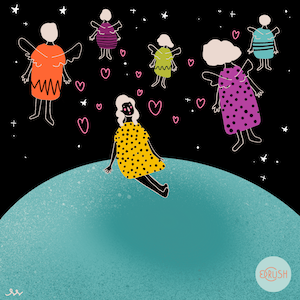 My First Solo Trip: Mexico, Part I. By Dawn Larsen

At a time of crisis, one PrimeCrush writer took a solo journey to Mexico, where she found she was connected to a circle of feminine kindness. Here’s Part I of her series.

My midlife crisis…well, one of them…happened in 2009 when I decided to travel alone to research in South Texas, hop on a plane and study in Mexico City, and then backpack from Mexico City to Hopkins, Belize, staying in people’s homes—or Couchsurfing—all without knowing Spanish. My thinking went something like, “I’ve written a dissertation, I’m raising a child by myself, I’ve bought cars and houses… For my next adventure, I’m going to backpack in a Third World country. I can do this!” One of my favorite Couchsurfing hosts in Mexico said, “Dawn, you are either brave… Or stupid.” Probably a little of both.

However, prior to the trip, I read as much as I could about solo traveling for women, packed an extensive first aid kit, got my shots, arranged most of the Couchsurfing stays, but it was impossible to pre-book travel tickets in Mexico and Belize.

I was fortunate to have several fortuitous experiences from the time I landed at the enormous Mexico City airport to my trip home, all centering on women. When the doors opened from the airport to the taxi stands, I was rushed by what seemed like a million men shouting at me in Spanish. One darted toward me, picked up my bag, and ran off with it. I shouted, “Espiri! Espiri!” Instead of esparer (wait!). I was shouting, “Ghost! Ghost!” Sheesh. A tiny Mexican woman must’ve noticed my distress because she ran over to the man with my bag, smacked him on the head with a magazine she was holding, grabbed my bag, lectured him using what seemed to be very strong words, and returned my bag to me with a smile and said, “Be careful…”

Mexico City had a wonderful subway system at the time. It was color coordinated, easy, and you could buy tickets out of machines that had English translations. Except, it was creepy for a woman who was quite obviously a solo traveler (wearing a large backpack). I was nervous especially when a group of men standing to my right kept glancing at me, speaking in Spanish, and snickering. To my left, there was an indigenous woman with two small children and a baby. When I glanced at her she smiled warmly and with her children came to me and nonchalantly pulled me away from that group of men to where she had been standing. I said: “Gracias.” She took my hand, patted it, smiled, and nodded.

At one point, I had had ee-fucking-nuff of slow, sweltering buses and I needed to travel within Belize. Somebody mentioned a brand-spanking-new airline that had just started up in the town I was in. The “airport” was a tarpaper shack with a tiny runway right by the ocean. For $40 American dollars and one hour, I could hop that plane versus suffering on a non-air-conditioned bus for six hours. Done. The plane had six seats beside the pilot and copilot. On it was two men, me, and across from me a young woman who was sitting rigidly. She looked at me and abruptly announced that it was her first ride on a plane. When the pilot revved the engine, with wide eyes she said, “May I hold your hand?” I said, “Of course…”

To get all of us, subscribe.My First Solo Trip: Mexico, Part I. By Dawn Larsen