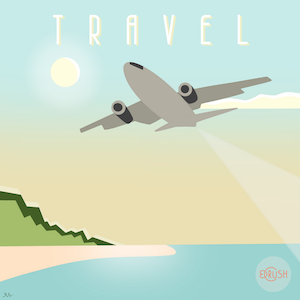 Once upon a time, we did not get our sense of the world from Instagram. We got it from adventurers and explorers and the exiled, voluntary and not so, and the great writers. Back when the world was rough and often unknown and certainly not photoshopped, we relied on these missionaries of the word to tell us what was out there. I’m talking up until about five years ago, by the way. The great writers always describe the exotic simply and the simple exotically. They immerse us in magical worlds so strikingly real and relatable and at the same time floating just beyond our reach, in timeless, perfectly preserved bubbles.

There are countless examples of magnificent, moment and place capturing travel books, some written by so-called travel writers, the majority not (at WONDERLUST, we chose a hundred of the best) but here are three. Just three --- read them if you haven’t already, and then just keep going…

A MOVEABLE FEAST by Ernest Hemingway

All Hemingway books are travel books. What better sense of Cuba can you get than from Old Man and the Sea? Where is there a more accurate, lasting depiction of Madrid and Spain than in The Sun Also Rises and Death in the Afternoon? Or, for that matter of Spain in its tormented war with itself in For Whom The Bell Tolls. Hemingway laid a sense of place in his writings like a classic painter layering thick paint on a canvass with a spatula. A Moveable Feast was actually a memoir, begun in the late 1940s when he was already a literary giant, and covers the period in his twenties, living in Paris when he wasn’t. Each chapter is a sketch, breathtaking in its tightness and beauty, a short but true story, of poverty and optimism and love and disaster, always against the celestial backdrop of a gorgeous and wounded city just years after the end of the first world war. It’s probably his lightest touch book but he labored over it longer and harder than any other and never really considered it finished. He died three years before it was published.

ON THE ROAD by Jack Kerouac

It sounds silly to say this, but it really is the ultimate roadbook. Hunter Thompson in particular, among hundreds if not thousands of other writers, tried to emulate it, but nobody could. Partly because it’s not really about being on the road, or a road, although it’s very much about a journey. This is arguably the Great American Novel. It’s nominally a story woven from road trips taken between 1947 and 1950 by Kerouak, characterized here as the gloriously named Sal Paradise, and another beat generation writer Neil Cassidy, disguised here as Dean Moriarty. Moriarty is a wild and free spirit, and might as well be a stand-in for America itself --- victorious and vindicated and relieved after the second world war. Moriarty gives Sal license to be adventurous and experiment with drugs and sex and to drift, literally sometimes and metaphorically always, on the wailing winds of the modern jazz age, somewhere between Charlie Parker’s height and Miles Davis starting out. Sal escaped normalcy with Dean and that really was, at the time, the real American Dream. Written and revised in the early fifties, the groundbreaking book was published in 1957. In 1961 Kerouak wrote to a student who had corresponded with him: "Dean and I were embarked on a journey through post- [Walt] Whitman America to FIND that America and to FIND the inherent goodness in American man. It was really a story about 2 Catholic buddies roaming the country in search of God. And we found him." That is pretty much the ultimate road trip.

This is an extraordinary book, which won the Pulitzer Prize in 2016, about the life of a man who never tried to be extraordinary, so, of course, was. An obsessed surfer who traveled the world in pursuit of the oceans’ best waves, he surfed off Africa, Australia, all over the South Pacific, and in his native California and Hawaii. A child and teenager of the fifties and sixties, the biggest wave he caught was the social revolution of the Baby Boomers and he perfectly captures that tumultuous and unfettered, often a clueless time when, suddenly, to some great and meaningful degree, youth took over the world. Like all the great writer travelers, he decodes the behaviors and foibles of the cultures he visits, the everyday, the simplest things that make mankind so infinitely and trivially complex and exciting.

To get all of us, subscribe.Thee Timeless Travel Books. By Bob Guccione Jr.