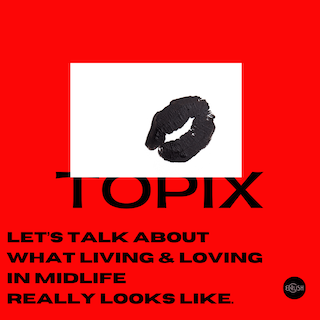 There is a prevailing narrative around midlife that maintains that being in a couple — preferably a long-standing married couple  — is not only widespread but also the natural and best way of living. In the “couple narrative,” each person’s partner is their everything (or nearly so): best friend, soulmate, lover, roommate, business partner, work-out partner, chess partner, pickle partner, you-name-it playmate. In a secondary constellation around them are coupled-up friends to throw dinner parties and go on vacation with, as well as each partner’s same-sex friendships.

But we’ve gone through seismic shifts in society over the last decade+. Divorce, same-sex marriage, an increase in the number of working women, artificial insemination, and single parenting have become commonplace. Against that backdrop, in midlife, we become empty nesters, divorced, and widowed. We change jobs or retire early, lose an increasing number of friends and family to death, move to sunnier places, grow apart. These evolutions, tragedies, and disruptions, along with just everyday ordinary life played out over time, add up to knowing ourselves more deeply. We become clearer about who we are, what we need, what we like and don’t like — and more confident acting on it in and with our most intimate circles.

If we take a closer look, we see that midlife relationships are a messier picture than our shared narratives tell. Among adults 40 to 54, there has been a significant increase in the number who are unpartnered (neither married nor living with a partner) — 38% in 2019, up sharply from 29% in 1990. And those who are married in midlife have a more complicated story than we admit: the 2016 U.S. Census Bureau Report shows that 43% of people who are 55 to 64 have gone through a divorce. Many remarry, but many marriages after 55 are not first marriages - many who are married are actually remarried, in other words. Seemingly slight cracks in the prevailing narrative, but the numbers are not minimal and the trend is pronounced.

Where we’re at, I believe, is a turning point. Where more of us are constructing more “curated” relationships in midlife — relationship structures that divert from expectations or assumptions, that are far more original and varied than are acknowledged by our friends and family, let alone society at large. We're still only whispering about them to our most intimate friends (if even that), but we'd all be better off if we found a way to speak up.

We all know of or have friends who are doing the Jackie O-Maurice Tempelsman thing - living in committed, long-term romantic and life partnerships with no intention of getting married to each other. In their case, Tempelsman and his wife of 30+ years never divorced; he separated from Lily Bucholz in 1984 and moved into Jackie’s Fifth Avenue building in 1988, 13 years after Jackie was widowed from Aristotle Onassis. Jackie and Maurice's relationship was not a secret, though there was remarkably little coverage of it at the time, particularly given the press’s love affair with Jackie.

Even among those who are married and appear to all the world to meet society’s familiar expectations though, the stories are richer and more nuanced than they seem.

Anecdotally, in my own small world I’ve encountered the following:

A friend who has been married 20 years and hasn’t had any kind of sexual intimacy with her spouse in over a decade. They’ve never talked about it. She assumes that he, like she, doesn’t want it any more (from anyone) and is going without.

Another friend, same set of facts. Except he has an old college friend (also married) who lives on the other side of the world with whom he started having regular, scheduled phone sex about five years into his sexual drought with his wife.

Another friend, same set of facts. Except they agreed to what I’ll call a “Not Divorced But Not Really Married Either” lifestyle. What does that entail? Ninety percent of the time they lead entirely separate lives. She stays in the city, he stays in the country. He does golf trips with his buddies; she goes shopping in Milan with her girlfriends. They have agreed that they can discreetly get involved in “curtailed” romantic relationships with others - for a trip, a season, an event - but the married couple comes together under one roof with their children for extended family vacations twice a year, as well as all the holidays, and presents a “married” front.

Another friend, same set of facts. Except she discovered five years into their 20-year marriage and after two children that her husband had been having a series of very IRL extramarital affairs with much younger women. He has lived a double life for 15 years while she has lived her own variation of that - keeping up the front (painfully, and for strategic reasons) of a solid partnership to her children, parents and friends.

A woman seated next to me on a long flight shared this less dramatic, but no less fascinating variation on her enduring marriage: very early in their tenure as empty nesters her husband got seriously ill and decamped to their son’s former bedroom. They had been in marital therapy and on a hard, committed course toward divorce, which got stalled while he recuperated. Lo and behold, they discovered that sleeping and living on opposite ends of their large home was the miracle their relationship needed. It offered independence and space that ultimately lead to “invitations” and “intimate dates” in each other’s “quarters.” It somehow worked against taking each other for granted and toward more effort and appreciation. They have lived that way now, happily, for 20 years. She offers the “separate bedroom solution” up to all her friends as an antidote for a failing marriage that is much less complicated and painful than open marriages, extramarital affairs or divorce.

And then there are the two women in their 60’s I met last winter. They were longtime neighbors in Connecticut - one divorced, one widowed. Neither of them has any interest in dating or remarrying. They are best friends who bought houses next to each other in Florida and have executed contractual documents giving each other similar authority and legal rights to what a spouse might have by law - health care proxy, banking and other legal proxies and rights, limited inheritance, etc. It’s “like a platonic same-sex marriage” one of them told me. It “might seem weird or ruffle family feathers,” so they haven’t shared it with anyone, but it feels “much safer than being alone, and certainly calmer than dating.”

Every one of these arrangements looks conventional from the outside. In many cases, few friends or family are truely or totally clued in.

Certainly it is nobody’s business but their own; I would not argue otherwise. Yet the sum total of so many unconventional arrangements remaining secret is inarguably harmful to us all. It serves to strengthen the dominant “couple narrative” that on its face leaves an increasing number of those who are divorced, widowed or never married left out and feeling socially ostracized. Of course, it also leaves the far greater number of couples who appear to meet the “couple narrative” but who actually engage in rich and complicated ways to partner up feeling hidden on some level. Perhaps even embarrassed or shameful.

At its worst, a pervasive adherence to a “couple narrative” has the stifling effect of encouraging people to stay in or enter into unhealthy or unhappy (sometimes even abusive) arrangements in order to feel socially accepted. (“I just don’t want to be alone — I’ll be invisible,” is what one friend in a verbally abusive marriage to an alcoholic admitted to me recently.)

But there is an insidious, creeping tragedy to the lack of honest conversation on midlife relationships that causes more widespread, corrosive damage, I’d argue. When nobody is talking openly about anything other than the prevailing, socially acceptable “couple narrative” then all of us are missing out on a cross-pollination of problem-solving ideas on how to live this one, short life we each get. We’re held up. We could be learning so much more — more approaches, more tactics, more tolerance. Not to mention the obvious by-product that it would undoubtedly give some of us more courage to take healthy, bold steps.

Those of us who are perfectly content with our own more traditionally structured relationships may be curious, even if some of these realities seemingly don't apply to our own lives, if for no other reason than to learn how life looks for a widowed friend, unhappily married sibling or happily solo neighbor. Maybe we can be more understanding, more inclusive, more supportive. By staying silent about these less conventional arrangements, we're all living lives with less imagination, less understanding, less courage and on some level, ultimately less love.

The truth, of course, is that there is no normal for marriage, for love or for sex. No normal for friendships in midlife either, come to think of it.

Let’s open up, share the real stories about our midlife relationships. Even if all we were to learn is that we are not alone in our glorious messiness, that would be enough. That would make some of us feel much less isolated, more validated. But the opportunity is so much greater. It as great as our imagination and willingness to share. The way I look at it, one thing we’ve earned in midlife as we’ve accumulated these years and experiences is the right to craft the intimate relationships that keep us feeling secure, excited, joyful and fulfilled.

Let’s start talking about it.

Stay tuned to this continuing series.

OMG Yes! Sign me up.
To get all of us, subscribe.TOPIX