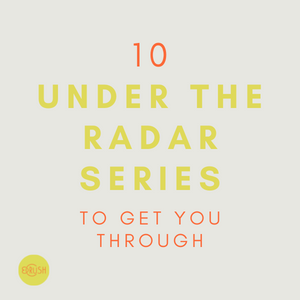 You’re up-to-date on Ozark, over your withdrawal from Inventing Anna, ready to put the disappointing And Just Like That experience behind you?  Simply put, we can not have too many escapes from the news right now.  Don’t call it bingeing, let’s reframe it to something healthier: self-care. If you’ve missed any of these engrossing series, now’s the time for you to let them check you out of real life.

Giri/Haji (Netflix) Thriller. A Tokyo detective scours London’s underworld to find his brother, who is equal parts poet and master assassin.  The story includes one of the most sophisticated, maturely handled love affairs I’ve seen since Casablanca.

Borgen (Netflix) A Danish political drama in which a minor centrist potician ends up as the first prime minister of Denmark, with all the personal and family reverberations that entails. The fictional inside look at the political maneuvering and compromise required in a multi-party parliamentary democracy adds to the intrigue, especially seen from an American perspective.

Scenes of a Marriage (HBO) Superb acting and an intelligent script turn this Ingmar Bergman adaptation about the disintegration of a marriage into a closely observed, brutally honest, moving tale of intense love, betrayal, jealousy and justice.

On the Verge (Netflix) A smarter, less commercial and more honest look at the friendship and love lives of four midlife women in L.A. It has an indie, loose-edged feel; hoping for a Season 2.

Trapped (Amazon Prime) If you like Nordic noir, this mystery series set in a remote town in Iceland is your thing.  It opens with a mutilated corpse found by fishermen, and continues with a cold, gritty, engrossing story. Slow Burn. Aces.

Offspring (Netflix) Absolutely addictive lighthearted Australian series that revolves around an anxious midlife obstetrician and very quirky family and up-and-down love life. If you need to good people getting improbably entangled and having fun, this is your show.

Babylon Berlin (Netflix) Set in Berlin during the Weimar Republic, this period piece is dripping with gorgeous art deco setting and costumes (reportedly the most expensive non English-language show ever made).  It requires close attention because the historical time and place is rich with intrigue, political factions and duplicity but the pay-off is huge. Deliciously sleazy/sexy underground scenes.

Fauda (Netflix) Two former Israeli Defense Force soldiers wrote this propulsive series based roughly on their personal and professional experiences as fighters. The story opens with an elite IDF agent getting pulled back into military service after retirement upon learning that the Palestinian terrorist he thought he had assasinated was still alive.   Psychologically and emotionally complex, thrilling portrayal of life in the IDF.

Call My Agent (Netflix) A Parisian talent agency fun by four partners who are struggling to keep their business alive after the sudden death of the agency's founder.  An entertaining look at the outrageous days and nights of being a French talent agent to major and minor stars, with all the ego, drama and beauty you'd expect.

Narcos Mexico (Netflix) A gripping portrayal of the origins of the modern war on drugs that began in the 1980's between the U.S. and Mexico. Mostly accurate, fascinating depiction of the power and politics behind the hunt by American DEA Agents on the ground in Mexico to destroy Mexico's drug cartels.

OMG Yes! Sign me up.
To get all of us, subscribe.Under The Radar Series. By Dish Stanley